Rank insignia for the various ARP services and from the autumn of 1941, the later Civil Defence Services, developed in two distinct phases during the second world war. The early-war Wardens' Service red braid bar and diamond insignia, and the red chevrons for Decontamination, Rescue and Stretcher Parties, worn on bluette overalls, were replaced in the autumn of 1941 with 'old gold' badges of rank for both senior and junior supervisory roles. The new insignia was introduced along with the new serge battledress for men and tunics for women. 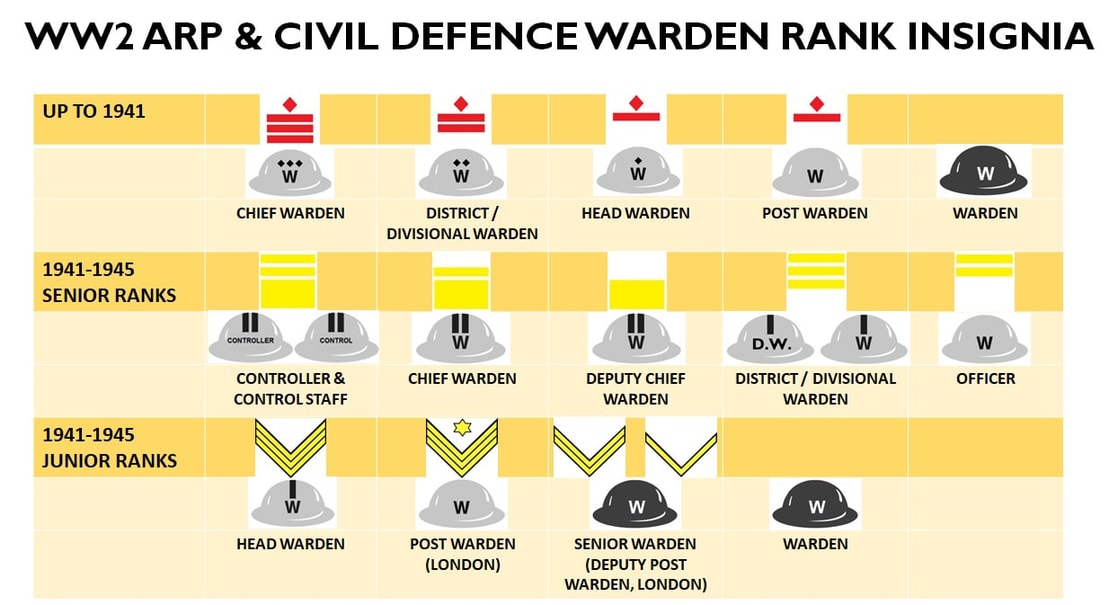 WW2 ARP & Civil Defence Warden Rank Insignia.
Note: the above helmet markings were not always followed to the letter. Period film and photographs show some wardens wearing various helmet markings, for example, a Divisional Warden in London with two black stripes or a white helmet with a single stripe plus 'SDW' (for Sub-Divisional Warden). Although the use of diamonds on helmets was phased out there is documentary film evidence of them still be used in 1942 and possibly later.

​There is photographic evidence of a single narrow yellow bar being worn. This rank was issued by Regional Commissioners.

Location of insignia on bluette overalls (up to late 1941)

Two distinct variations of insignia for senior and junior ranks were created with the formation of the Civil Defence Service in 1941 (the term civil defence had been used pre-war but the creation of a unified service brought all the various services under one roof). For senior ranks broad and narrow "old gold" yellow bars worn on the upper sleeve were introduced. For junior ranks, chevrons in "old gold" yellow were worn in the similar place to other ranking systems in the army - midway between shoulder and elbow.

Both senior and junior ranks could become an Incident Officer. The incident officer wore a special IO badge on the lower left sleeve. They also wore a special blue covering on their helmet to make them stand out at air raid incidents. Incident Officers could be from any rank. For information on lanyards worn on the shoulder see this page.

There is photographic evidence of wardens wearing battledress with red braid bars and diamonds. This must have happened only for a short period in mid- to late-1941. It is assumed that although the battledress was available the badges of rank had yet to reach local authority stores.

Rank insignia was "old gold" yellow on dark blue measuring 2½ inches wide by ¼ inch for the narrow bars and ¾ inch for the broad bars. Senior rank badges were worn with the top bar 1 inch below the shoulder title and were either printed or embroidered.

Junior rank insignia within the CD services were yellow stripes of one, two and three chevrons. The chevrons were either printed or embroidered.

Head Warden or Post Warden in London - three chevrons  (sometimes with a six-pointed star above the chevrons). Helmet - white with black W (some with single black stripe), though P.W. was used also.
Senior Warden (Officer-in-Charge) - one (rarely seen but used in some areas; some local authorities issued a single chevron to members who had performed two years' service) or two chevrons. Helmet - black with white W. 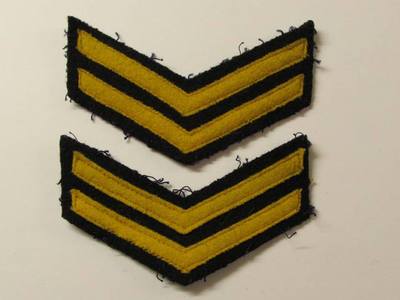 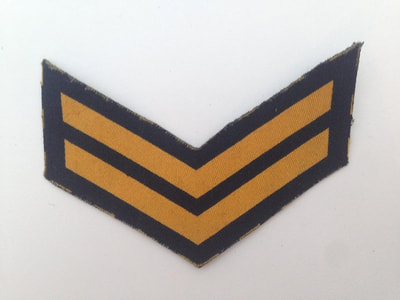 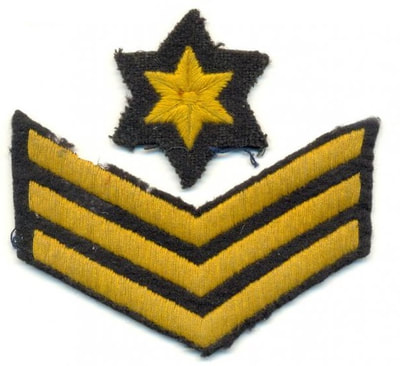 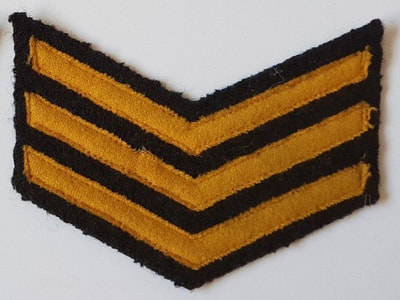 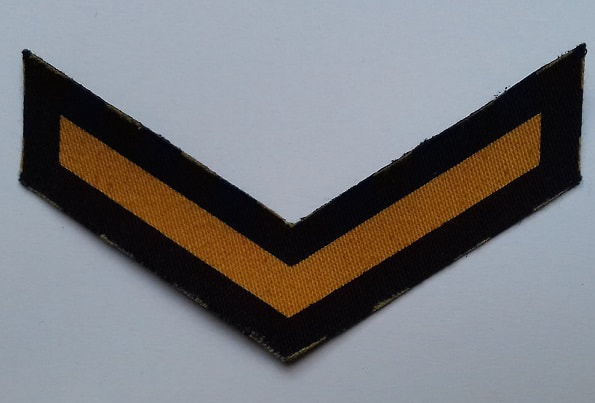 Use of insignia across other Civil Defence Services from August 1942

The 'old gold' insignia was adopted across all Civil Defence Services from August 1942. The following table illustrates a general overview of how each rank was used. There were many local variations to this. 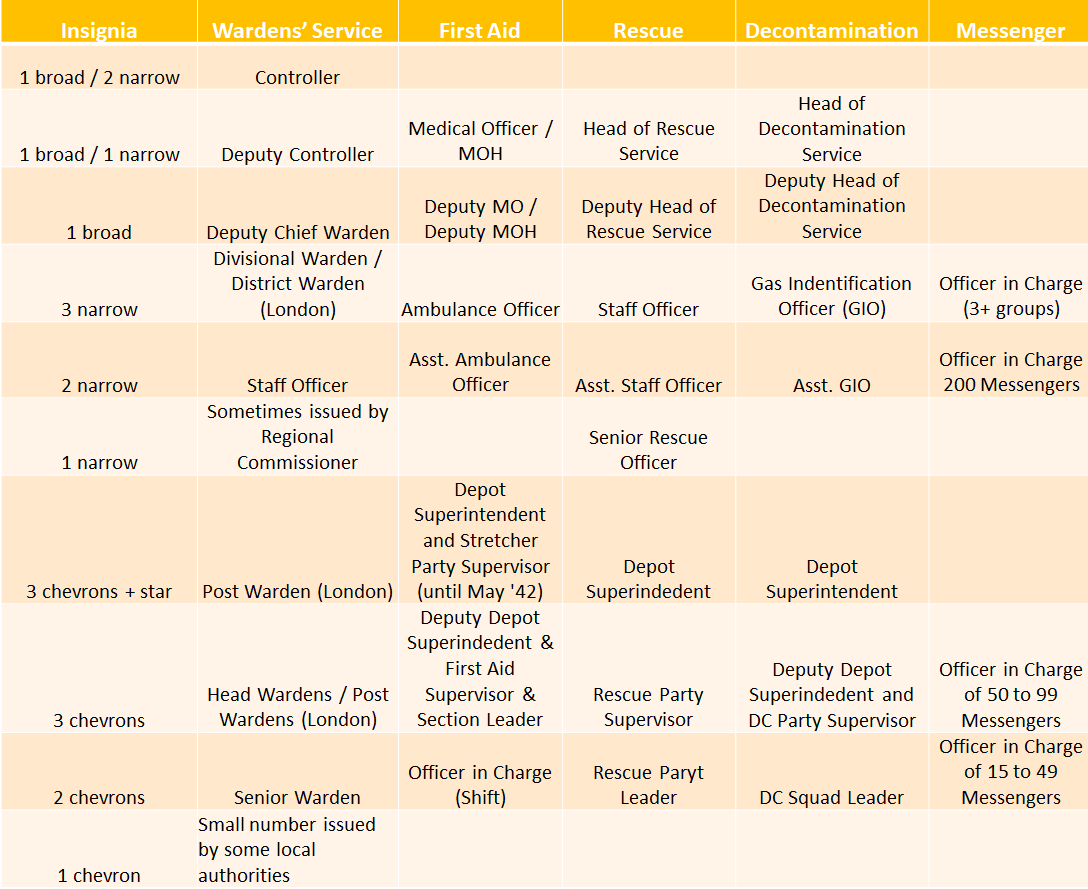 Civil Defence Service Ranks From August 1942
To submit original rank insignia please send me an email via the contact page.

Post-war insignia and badges of the Civil Defence Corps

The Civil Defence Corps was created in 1949 and although they adopted similar ranks as the wartime Civil Defence Service, there are subtle differences in the size and material used for both senior and junior ranks. Badges are much thinner and stars were five-pointed from 1949 rather than six-pointed. The colour also changed from an old gold to a more distinct yellow.

​I have created a page detailing the various Civil Defence Corps badges and insignia.