July 1935 - the Home Office issues guidance to local authorities for the recruitment of volunteers to serve as unpaid and in a part-time capacity as wardens, rescue workers and first aid attendants.

April 1940 - Fire Authorities selected, trained and organised ‘Supplementary Fire Parties’ (issued with SFP armbands).
​
September 1940 - Fire Watchers Order made it compulsory for owners/occupiers of commercial and business premises to have fire watchers on duty at all times. Trained to deal with small fires and request assistance from local fire brigade.

October 1940 - Access to Property Order granted to Wardens and others the right of access to private dwellings and commercial buildings to tackle incendiary bombs.

December 1940 - Second Great Fire of London showed previous legislation was not up to the needs of the Luftwaffe bombing campaign. 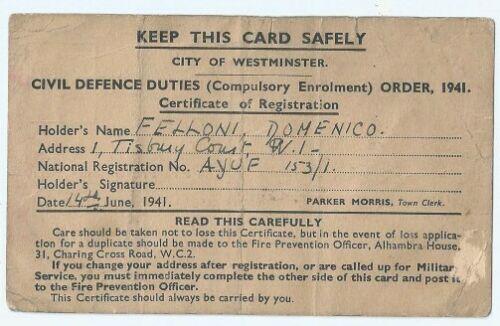 Early 1941 - Fire Watchers Order replaced by the ‘Fire Precaution (Business Premises) Order’. Local authorities required to arrange plans for detecting and extinguishing fires in prescribed premises and industrial districts. Compulsory for all males 16 to 60 to register for part time duty of 48 hours per month.

August 1941 – National Fire Service (NFS) created by the amalgamation of the wartime Auxiliary Fire Service (AFS) and the local authority fire brigades (about 1,600 of them).

August 1941 - ‘Fire Guard Organisation’ formed under the supervision of the Wardens’ Service. Organised on a national basis with rank structure under the control of the local Chief Warden. Introduction of ‘Fire Guard Depots’ and full-time paid positions that organised volunteer ‘Street Fire Parties’. ‘Fire Guard’ armbands replaced ‘SFP’ ones.

Compulsory service for men was extended to 63 years of age and voluntary enrolment for men between the age of 16 to 70 and for women 18 to 60.

December 1943 - some 6 million people enrolled in the Fire Guard organisation.

13 June 1944 – fall of V1s but Allied push into occupied Europe saw a lessening of the risk of air raids. In areas no longer under threat, the Wardens’ Service again took over responsibility for reporting fires. Day time Fire Watching duties at the majority of business premises relaxed

6 September 1944 - substantial reductions in the Civil Defence Organization except in London and the southern / eastern areas of England.

2 May 1945 - the whole Civil Defence organisation stood down and disbanded.