Almost as ubiquitous as the silver ARP badge, the ARP whistle was standard issue to air raid wardens (and later other Civil Defence Services) prior and during WW2. It is thought over one million of the three-inch-long cylindrical nickle-plated brass whistles were produced.
​
The ARP whistle is identical to the standard police whistle (‘The Metropolitan’) and emitted a piercing two-note screech that could be heard up to a mile away. The first contract for ARP whistles came in 1938 and was with Birmingham-based manufacturer J. Hudson and Co. All whistles were nickel-plated brass and engraved with “A.R.P.” and Hudson’s details. Each carried the following markings:
​A.R.P.
J. HUDSON & Co.
BARR ST. HOCKLEY
BIRMINGHAM

ARP whistles made by Hudson's
Ironically, the Hudson factory in Birmingham suffered extensive damage during a German air raid on 26 October 1940. Thankfully, no one was injured. From the late 1880s Hudson’s had become the pre-eminent supplier of whistles to police forces, the military, railways and sports clubs across the British Empire. The company is still running today but now known as ACME Whistles (and still located in Birmingham).

Initially the Home Office and the Treasury (responsible for the Air Raid Precautions budget) conferred on the cost of allocating an ARP whistle to every warden. The Treasury wanted whistles to be shared and stored at Wardens’ Posts (June 1939 HO 186/1788). For hygiene reasons though whistles as well allowing wardens to sound the alarm immediately without first reaching a wardens' post, whistles were given to every warden and later in the war to other civil defence services such as Rescue Squads and Fire Guards / Fire Watchers.

The initial contract with Hudson's for ARP whistles in 1939 cost 7 shillings and sixpence (7/6d) per dozen whistles. By June 1939, some 221,000 whistles had been procured. With the issue to all air raid wardens an additional 240,000 were required. Hudson's offered a small reduction in the price per dozen to 6/6d. It appears Hudson's could make approximately ten thousand whistles per week.

How the whistle was to be used during air raids was included in the 1939-dated “Some Things You Should Know If War Should Come” a pamphlet subtitled “Public Information Leaflet No. 1” (from the Lord Privy Seal’s Office):

When air raids are threatened, warning will be given in towns by sirens or hooters, which will be sounded, in some places by short blasts, and in other places by a warbling note, changing every few seconds. In war, sirens and hooters will not be used for any other purpose than this.
The warning may also be given by the Police or Air Raid Wardens blowing short blasts on whistles.
When you hear the warning, take cover at once.

In 1941 it was decided that short blasts on a whistle would indicate to the public the fall of incendiary devices. This change led to a further distribution of whistles to all reserve members of the wardens' service but not. oddly, to Supplementary Fire Parties. Long blasts on the whistle were to reinforce an imminent air raid. By May 1941 the cost of a dozen whistles ordered by a local authority had risen to 16/-d (the actual contract cost to the Home Office was slightly cheaper). Two companies were offered contracts in 1941; 60,000 from Hudson's and 40,000 from another Birmingham-based manufacturer Adie Bros. Ltd. Adie whistles were marked:
​ADIE BROS
BIRMINGHAM
G (CROWN EMBLEM) R
VI
1941 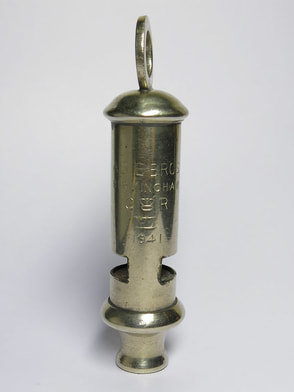 Adie Bros 1941 whistle
There has been some debate about whether the ARP whistle was manufactured slightly differently to the standard police whistle to produce a different tone. The reasoning given was to ensure that the police could hear the difference and know that the call was not from another police officer requiring assistance. However, a letter from HM Office of Works in June 1939 states that 73,000 whistles (from the initial contract of 221,000 whistles) had been allocated to Police Constabulary Services. It therefore follows that the whistles were identical.
​
ARP whistles regularly appear for sale online and at all sorts of second hand and vintage fairs. They are not an item that generally commands a high price for collectors or re-enactors and can be easily obtained for under £10. There are always dozens available on eBay for example, but do check condition as a large number exhibit wear to the nickel finish. Adie Bros whistles marked 1941 are somewhat rarer and can fetch between £20 and £35.​

The Ministry of Works ordered over half a million black acetate (plastic not Bakelite) whistles from 1943 (covered in Home Security Circular 230/1943). The use of acetate was much cheaper than the metal ARP whistle; a plastic whistle cost just threepence (3d) in 1943. After a number of samples were tested by the Ministry of Works, a version similar in shape to the police whistle was chosen. The need for substantially more whistles was driven by the reorganisation of the Fire Guard Service and their involvement (at night) in calling out the fire services to fires and also indicating the fall of incendiary bombs using their whistles. The Warden Service still had a responsibility during the daylight hours.

An initial contract was sent to Cascelluloid Ltd of Leicester for 20,000 whistles. The contract size grew rapidly and Cascelluloid had to involve another firm - Halex Company - to assist in the delivery. Another firm Roanoid also received a contract to produce 100,000 whistles. A constant need for more whistles meant manufacturing continued into 1944. Whistles were sent to various delivery points nationwide from where they were dispatched to local authorities. Local authorities issued whistles to Fire Parties as well as sold the whistles to business premises. 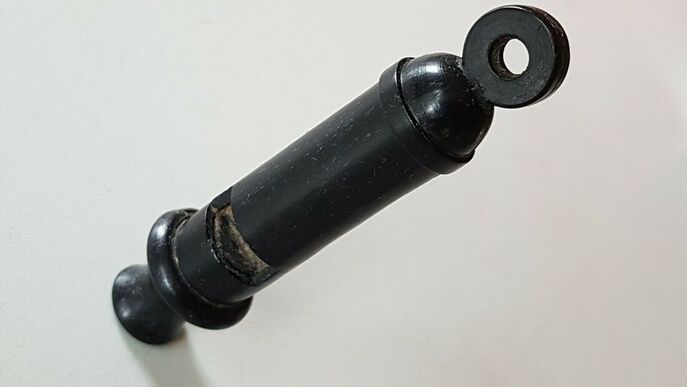 The ARP whistle was made with a ring at one end through which a chain or lanyard could be attached. Prior to the outbreak of war, air raid wardens were not issued with any form of uniform. It probably follows that they either used a cord or string, a chain (similar to that issued to the police, which could be looped through a button hole) or carried the whistle loose in their pocket. From October 1939, when bluette overalls were first issued to wardens, lanyards are seen in period photos looped over the shoulder and the whistle was then placed in a breast pocket.
​
With the introduction of the battledress and tunic uniforms from mid- to late-1941, a large number of wardens and civil defence personnel bought a knotted lanyard for their whistle (generally coloured white in London and ‘old gold’ yellow elsewhere but red ones are known to have been used). Lanyards were not an item that was issued by local authorities and they had to be purchased privately.

As the majority of people were right handed the lanyard was looped over the left shoulder and under the battledress epaulette. The whistle was then popped into the left breast pocket of the battledress blouse. Female members of the civil defence services also wore the lanyard and placed the whistle in one of the pockets of the ARP 71 tunic. Photographic evidence on period photos shows the lanyard also worn on the right shoulder. 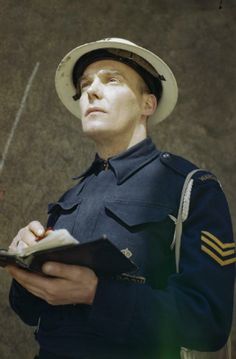 The white lanyard worn over the left shoulder was found in London. 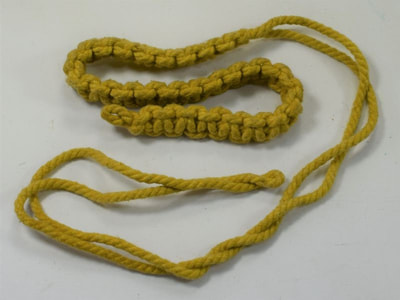 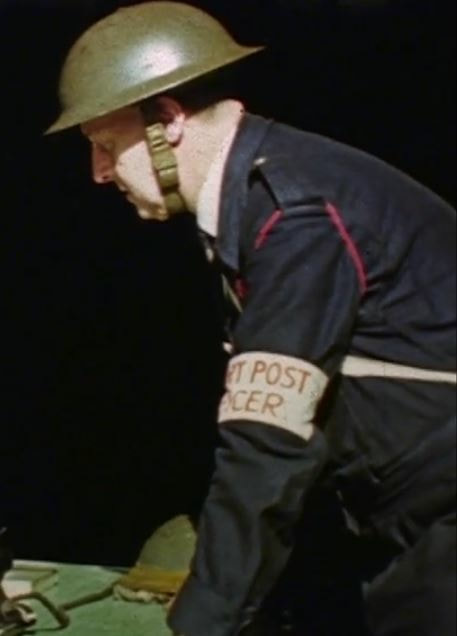 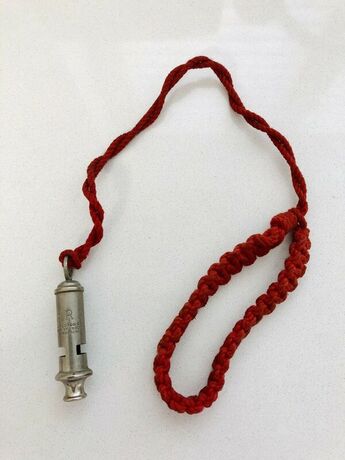 A number of manufactures produced whistles targeted at civilians. These were to be used to alert rescuers in the event of being trapped inside a bombed building. 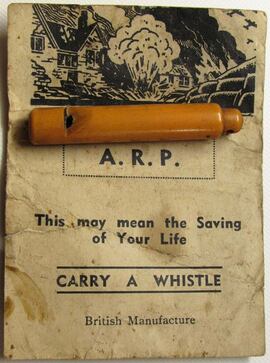