If you have a keen interest in ARP wardens and other civil defence personnel then going one step further and reenacting may be for you. In the UK there are hundreds of groups dedicated to reenacting all aspects of the second world war. The home front is am area of growing popularity and there are groups spread all over the UK that can assist and advise any newcomers. Over the course of the year there's almost always an event on most weekends (especially from April to October). View a selection of re-enactors' photos

An excellent reference for Civil Defence uniforms is Air Raid Precautions Memorandum No. 17 1944. 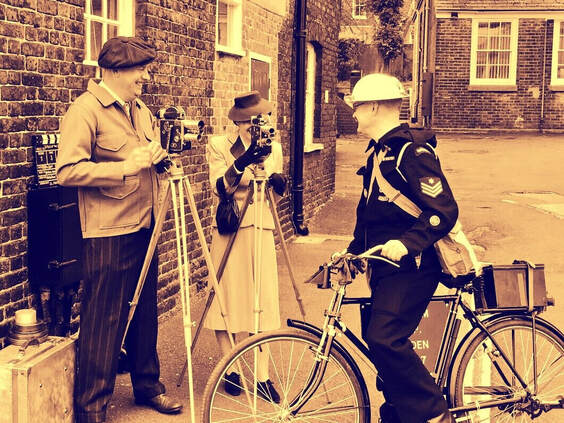 Re-enactors at a 1940s event at Chatham

Original bluette overalls are very hard to come by and very expensive (often over £200 and in April 2021 a militaria vendor priced a pair at a whopping £500 on eBay). Some post-war overalls are a close copy but usually don't have epaulettes, don't have the leg pocket (though some early versions did not have this feature), need a ruler pocket removing on the leg and obviously need all the buttons changing.

​The only company I would recommend (based on feedback from re-enactors and not personal experience) is The Frontline Company. Some may think £295 is expensive but these are made to order but good quality I hear. From personal experience, I looked into a small run of overalls and the cost was approaching £250+ per set before I threw the towel in. 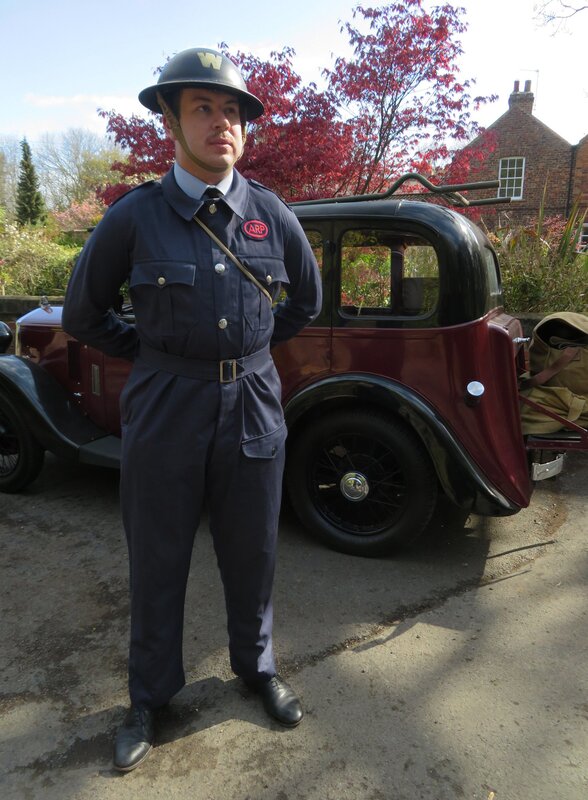 Men's Battledress blouses and trousers are a little easier to find due to a similar uniform being worn until the 1960s by the Civil Defence Corps. Some of the original larger sizes go up to 46" chest and 44" waist. If bigger than this you will need to get made-to-measure. I personally have no experience of any bespoke civil defence uniform manufacturers.

I have heard that some re-enactors have had their ARP & Civil Defence uniform made to measurements sent to tailors in Pakistan and India. I have heard both OK/positive and very, very poor feedback regarding them. Good when the uniform arrived and was to size; very poor when it arrived and was no where near the size requested (more an issue with trousers it seems). Getting anything done if you have a problem with your order is next to impossible and the few people I know had to simply write off the expenditure (they sold the uniform on to someone it would fit...). I will not list any vendors as I do not want to be held responsible if it goes pear-shaped.

I have not encountered anyone reproducing any of the second world war CD uniforms for women such as the ARP pattern 71 tunic. Original items do crop up from time to time (but be aware that post-war battledress dress blouses for women were not worn during the war (a few photos show a few ladies wearing a man's blouse).

I have a page that details Civil Defence Corps badges and insignia
If you're getting into re-enacting Civil Defence service personnel from the second world war then a little research can save you both money and getting called out at an event by a stitch Nazi. What's a stitch Nazi? Well, there are a few re-enactors who take things a little too seriously. For them everything, and I mean EVERYTHING, has to be identical to that worn in the war... If you come across one, simply walk away.

There were also a number of distinct organisations within the CDC that did not exist during the second world war, for example the shoulder titles with WELFARE, HEADQUARTERS and INTELLIGENCE & OPERATIONS. I have seen no photographic evidence of these shoulder titles being worn in WW2 and they do not appear in any official lists.

With the reintroduction of the Civil Defence Corps during the Cold War, the dark blue uniform of battledress and trousers was maintained. There is no difference in the general cut of the uniform but the uniform material is more of a blue shade than wartime examples which were almost black in colour. However, many different manufacturers made WW2 uniforms and the shade of wool does vary.

As above the post-war blouses feature CD and crown black plastic shoulder buttons - these were not issued in the war. Wartime blouses had plain black revolving shank buttons or (four-hole plastic dish buttons on austerity versions).

FARB - no one is quite surely of the derivation of this term but it has come to signify errors in uniforms and insignia on re-enactors uniforms and kit. Getting an impression spot on takes time, money and research. Everyone will make mistakes when starting out but many re-enactors are happy to share their experience and knowledge to help you get your look right. Nearly every person I've met has been a help (except a certain chap called Nathan I once unfortunately met at Chatham Dockyard who was a complete and utter knob of the highest order...).