In the summer of 1940, Supplementary Fire Parties were organised by local fire brigades to assist in dealing with the outbreak of fires caused during air raids (from incendiaries mainly). They wore a dark blue cotton armband with red SFP letters. From August 1940, these armbands were then issued to the Street Fire Parties that were organised by the Wardens service. There were also armbands with the word FIRE in red issued.

Both Supplementary and Street Fire Parties were reorganised into the Fire Guards. Existing SFP armbands were updated with a FIRE GUARD patch sewn over the SPF letters. 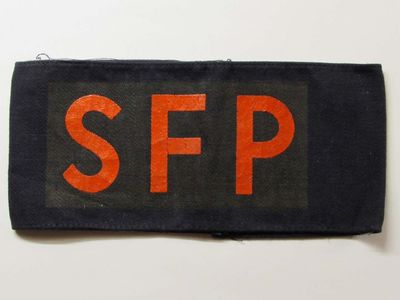 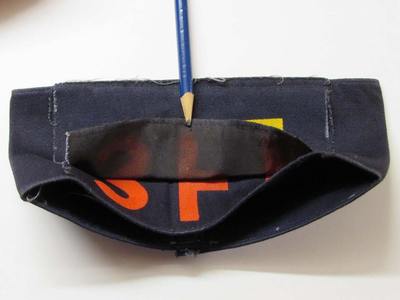 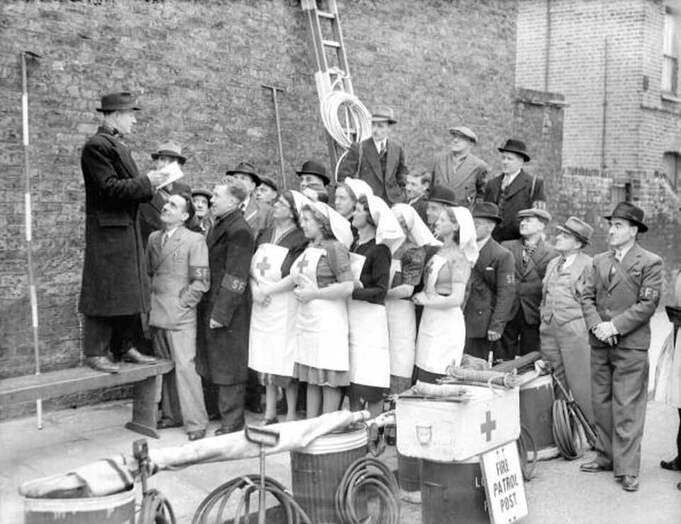 ARP Pattern 39 armlets featuring FIRE GUARD in gold/yellow lettering on dark blue cotton were introduced in August 1941. 1.8 million were ordered, as well as 1 million patches for sewing over the existing armlets worn by Street Fire Parties. White lettering on dark blue cotton was introduced during 1943 reorganisation to differentiate itself from the Wardens' Service. From March 1944 members of the Fire Guard were officially allowed to add war service chevrons to their armbands. The chevrons were to be placed to the left of the writing when viewed by another person. Additionally, wound stripes could be sewn to the right of the FIRE GUARD lettering; if both gold and red wound stripes had been awarded just a single red was allowed placed to the right of any old gold ones. 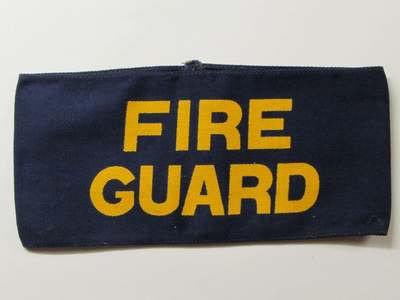 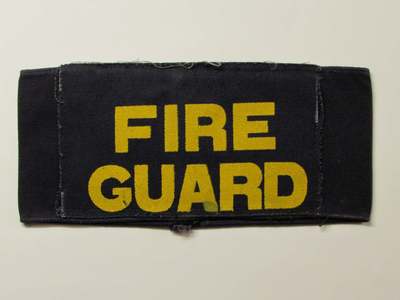 WW2 Fire Guard armband - a patch has been sewn over a SFP armband. 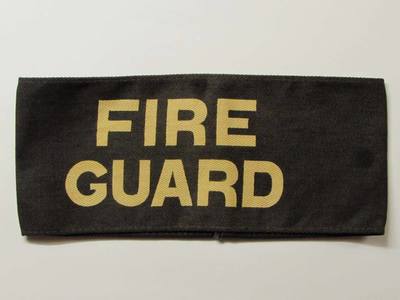 A large variety of Fire Watcher badges were manufactured and issued by companies to people undertaking fire watching duties. 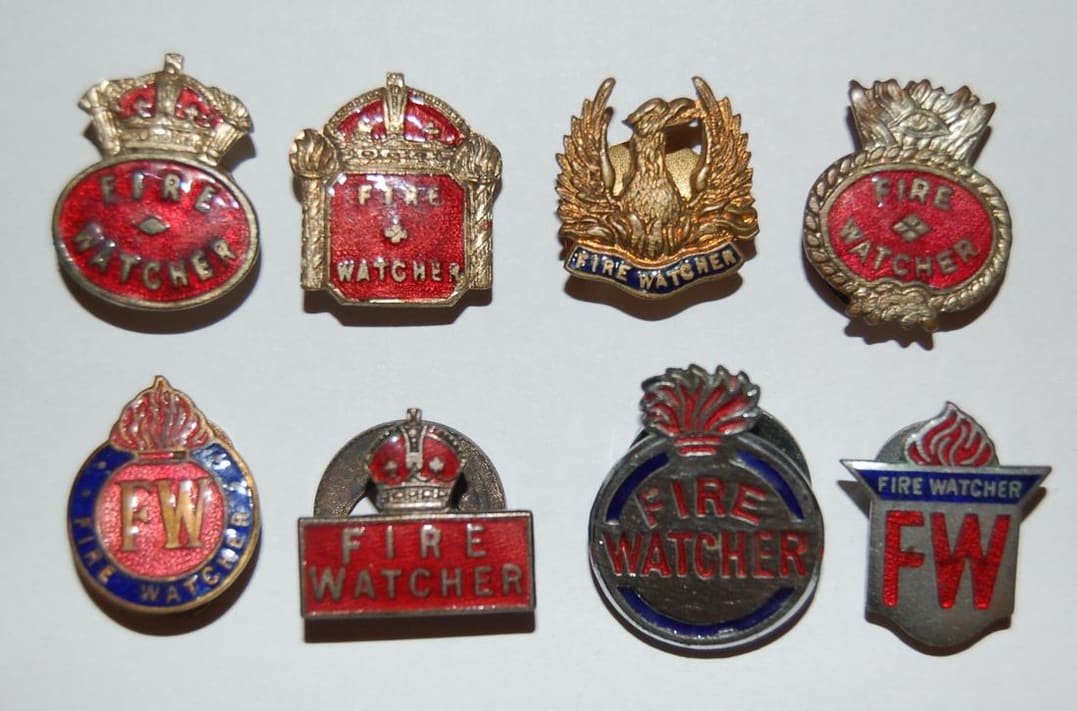 Many Fire Guards were issued with the Zuckerman helmet. This helmet, with a high dome to withstand impact, was relatively cheap to manufacture and used a mild steel of a much lower quality than that in the typical Mk. II helmet.

It featured a simple leather lining that was attached with a bootlace string through holes in the helmet.  Helmets were marked M & L (Medium and Large) and had two loops for a chinstrap but none was included. A makers stamp and date of manufacture appear on the majority of examples.

A number of helmets were issued with SFP (for Street or Supplementary Fire Party) but were replaced with FG from August 1941. However, many examples of SFP continued to be used throughout the rest of the war. Seniority within the Fire Guard service was denoted by black bands around the helmet. There is photographic evidence of some Fire Guard personal with the Mk.II helmet and "W/FG" for "Warden/Fire Guard". 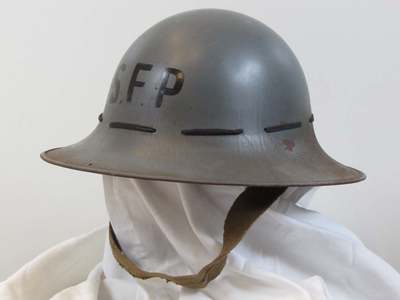 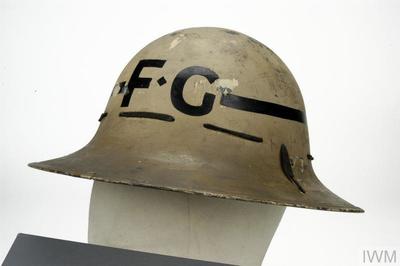 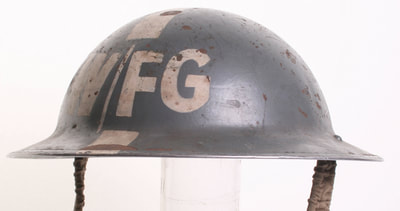 As members of the Wardens' Service, all ranking Fire Guard officers (for example Head and Senior Fire Guards) were entitled to wear the same dark blue battledress and trousers seen worn by other Civil Defence services. To signify their role within the Fire Guard service distinct insignia was available; these included specific shoulder titles, rank badges (three chevrons for Head Fire Guards, two chevrons for Senior).

When the Fire Guard service was reorganised in August 1943, new shoulder titles - white lettering on blue (but a lot of old gold yellow versions exist) - replaced the previous title of Warden: 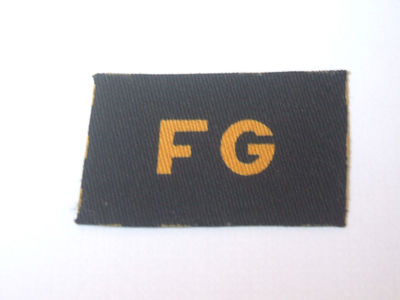 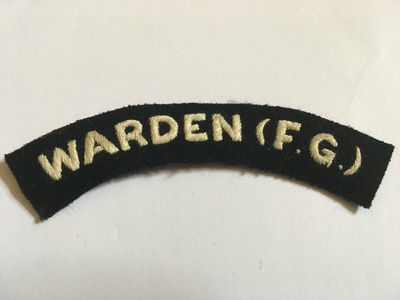 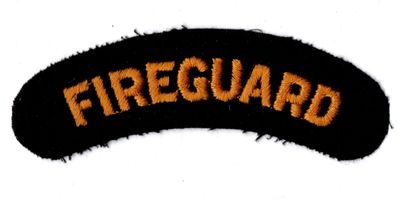 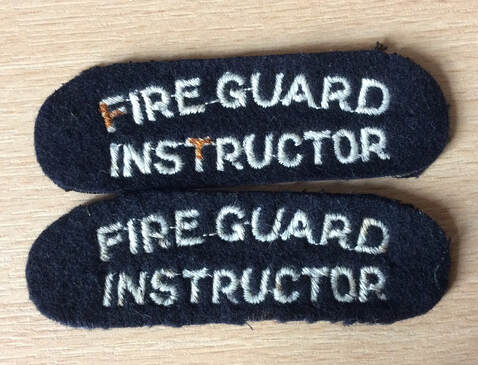 As the role of Fire Guards allowed them to enter premises to deal with fires, they received identity warrant cards for the purpose. Similar to the cards issued to ARP wardens these cards usually carried the holders name, the local authority and the measures that individual could undertake. 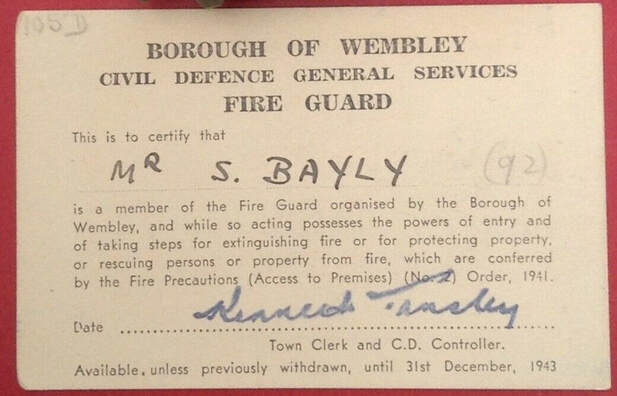 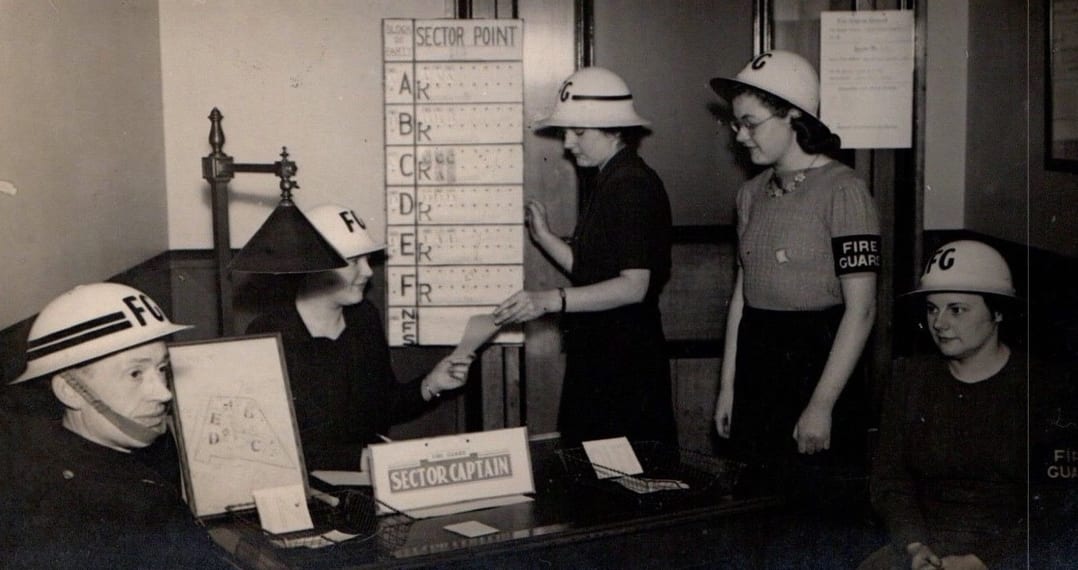 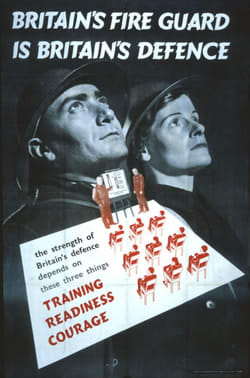