Clothes rationing was introduced in June 1941 and by March 1942 all WVS uniforms were centrally managed by the Ministry of Home Security. Later that year in August, WVS members could purchase material to make their own uniforms. As not every member could afford to buy their uniform, financial support was offered.
​
A major change to the cost of WVS uniforms came in January 1943. Also introduced were regional strips to denote the region a member belonged to. From March 1943 only the wrap-over overall was available for purchase and armbands were introduced for those without a uniform. War service chevrons were issued from April 1944.​

Read a guest blog post from Jon Mills about the Ladies in Green. 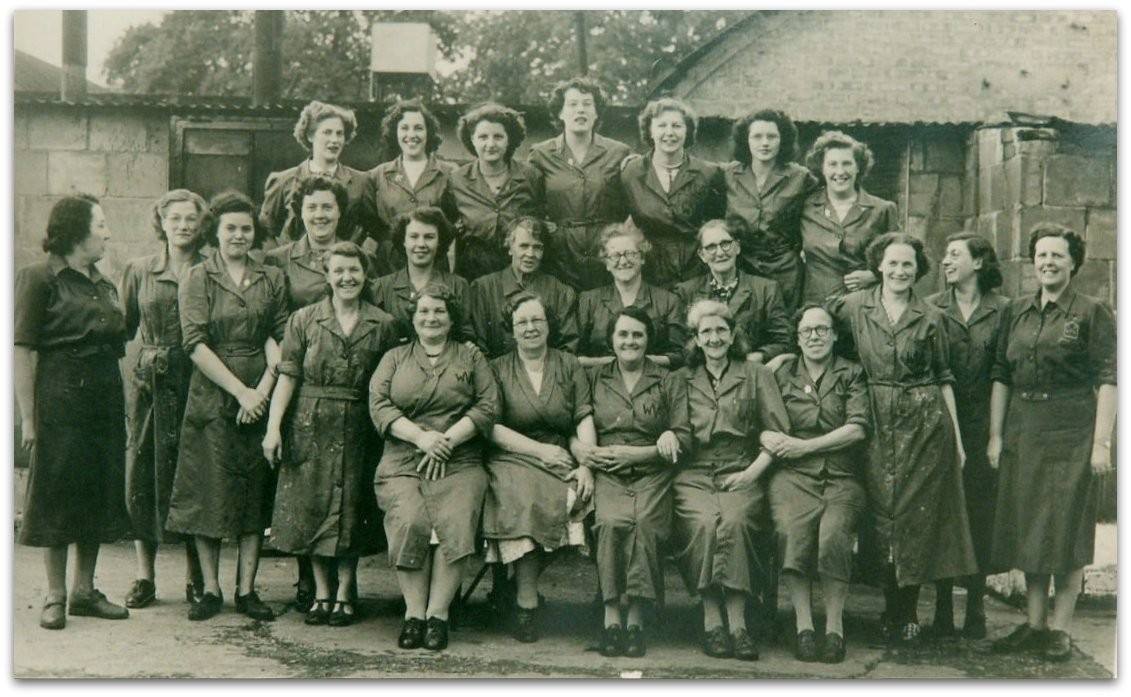 The below photograph features several of the common WVS uniforms available to volunteers in WW2:

​(Missing from the photo is the wrapover overall.) 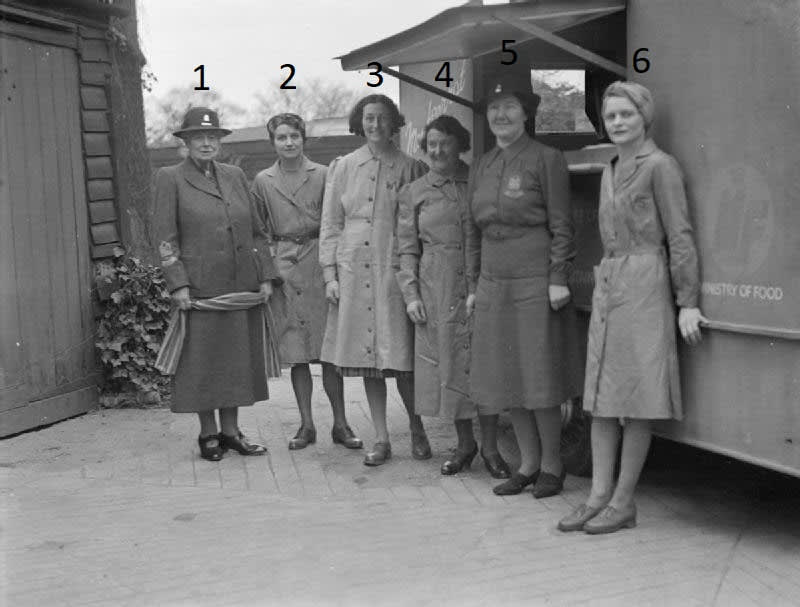 Several of the common WVS uniforms worn in WW2

The summer pattern dress issued in 1940 was a mid-length, long-sleeved dress of grey-green flannel fabric. It had a turn-down collar, fastened at the front with six buttons from neck to waist, had shaping darts to the upper chest and back, a single patch pocket to the left breast, two patch pockets with single-button closures to the front of the skirt, a vertical vent opening to the left side of the waist closed by five press-stud fasteners and button cuffs. The dress came with a detachable waist belt of matching fabric, secured at the front by passing the ends of the belt through a cloth ring and buttoning them back. All buttons are of the plastic four-hole variety and are grey-green in colour to match the dress. Sewn to the breast pocket is a light grey square cloth badge with the text 'W.V.S' above 'CIVIL' above 'DEFENCE' in a square border surmounted by a King's crown in red embroidery. (Images IWM UNI 4740)
When sourcing an original dress it is vital to pay close attention to the design details above. A lot of post-war WVS dresses are sold as wartime but there are a number of differences to be aware of, the key one being that post-war dresses have four sets of two buttons. 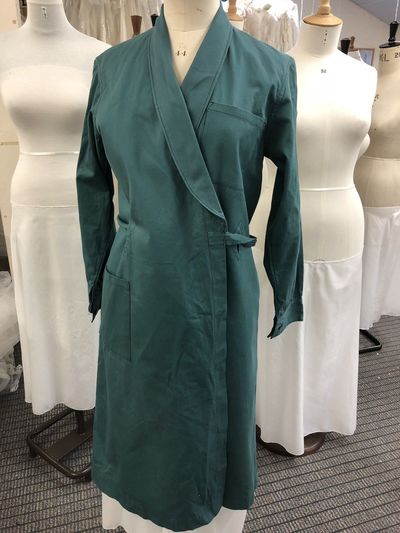 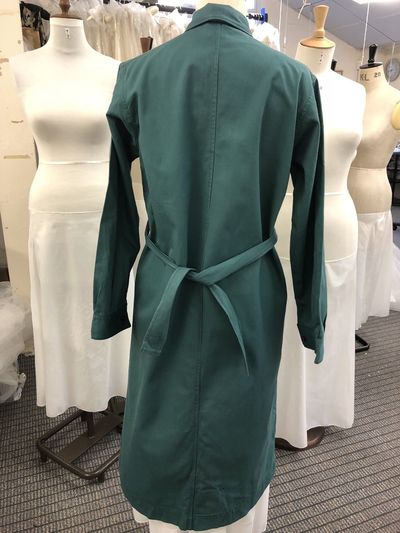 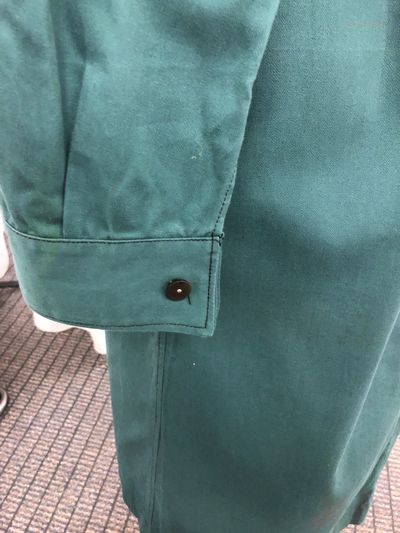 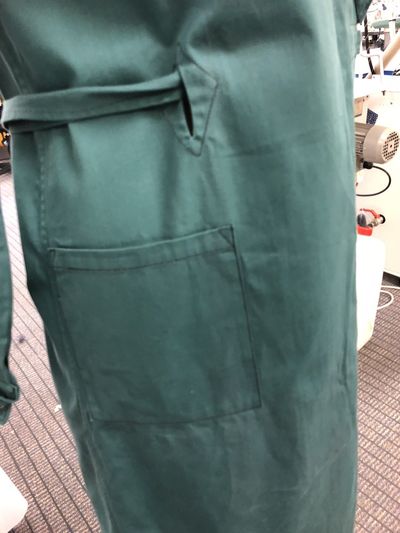 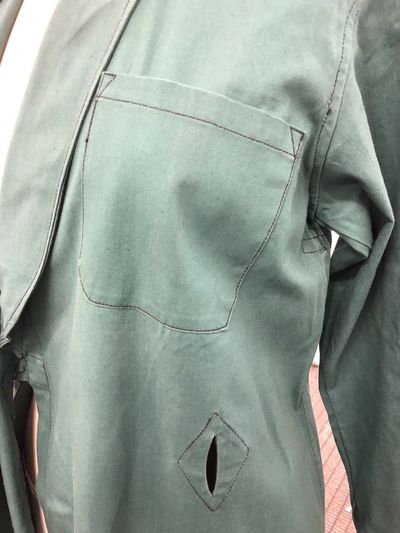 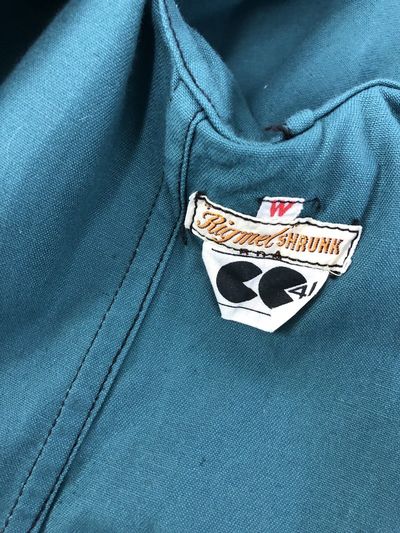 The original role of the WVS was to encourage women to join the ARP services as wardens or ambulance drivers or in hospitals. The first pattern badge with ARP on it was issued for only three months from November 1938; it was issued following training and cost 6d to purchase. In February 1939 the WVS changed into the Women's Voluntary Services for Civil Defence and a new badge was issued. A few versions of this badge exist - one with enamelled lettering and a later version with painted lettering (a war-time economy measure).

The embroidered WVS Civil Defence badge was worn on the lower right sleeve of the tweed jacket and overcoat and the left breast of the dress.
Note: during the Second World War the WELFARE shoulder title was not available. It was a post-war title worn by WVS members often attached to Civil Defence Corps duties (such as the Flying Food Squads).

The WVS followed the Civil Defence Services in being split into 12 regions, each with a Regional Commissioner. Each county had a County Organiser plus County Borough Staff. Within the county were Centres with Centre Organisers (plus deputies).In the region of 2,000 WVS centres existed during the war.

There is a "WVS CLUB LEADER" badge in a similar bar brooch format but I have been informed this is a post-war badge (though I do not have any documentary evidence at this time to back that up). A red enamel "COUNTY STAFF" badge is also though to be post war.

Introduced in 1943, the WVS monogram badge could be purchased by any member of the organisation for 4 shillings & 6 pence. Worn usually at the neck on the marron blouse or dress. For those WVS members working with the NAAFI, a special badge was available.

An embroidered area marking was worn below the WVS badge on the sleeve of the tweed jacket and overcoat.

A number WVS members volunteered to work in American Red Cross (ARC) canteens and service clubs.  The blue version of the badge was issued from 1943 for British volunteers working for the ARC for at least 150 hours, the red version was for paid staff who served the ARC in Britain for at least three months. The background to who was issued the GB & WE (Great Britain and Western Europe) isn't currently known but probably paid personnel who were employed for at least three months.

WW2 American Red Cross Great Britain badges
The archivist from the WVS has written a detailed overview of the uniforms of the WVS worn during the second world.